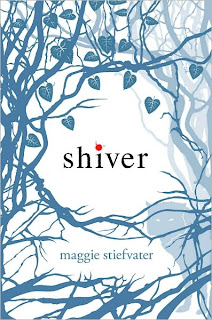 Summary:
"the cold.
Grace has spent years watching the wolves in the woods behind her house. One yellow-eyed wolf - her wolf - watches back. He feels deeply familiar to her, but she doesn't know why.

the heat.
Sam has lived two lives. As a wolf, he keeps the silent company of the girl he loves. And then, for a short time each year, he is human, never daring to talk to Grace... until now.

I've been hearing amazing things about this book since before it was even published. I was able to give the book to a librarian I work with before I could settle down with it. She told me it was amazing and I had to get it immediately - without further ado! So, I did. Really, really, really good idea.

This book was more paranormal romance than a werewolf story. When I think of werewolves, my brain automatically clicks to changing in the moonlight, silver bullets, crazy half wolf, half human bodies... and so on. Hollywood has done crazy stuff, right? But this story was more about a love and the impossibility of them being together.

I really enjoyed the idea of werewolves being a seasonal thing and actual wolves. It just makes the whole idea a little more believable and something I can wrap my brain around. But all of this is just the bones of the story - the basis for which the story is built.

The whole star-crossed lovers shtick is really common right now, but I enjoyed the way it was done in this book. I really liked the way the chapters flipped back and forth between them - it's nice to get both sides of the story. It gives the whole thing a different perspective and that's something that I haven't seen in a while.

I had a customer (teen) tell me today that I was going to cry toward the end. She even said she would come back and ask me if I did... because she was that sure. And I have to admit, I definitely teared up - it was so touching and emotional! I'm not going to say anymore... just that you need to read it!

On to the basics... I recommend this book very highly. I'd probably say anyone in 9th grade and up - it's got a little of the sexual themes to it, so it would be better for the older teen. But the book is amazing and Stiefvater is quickly becoming a favorite of mine. From Lament that I read a few weeks ago, this, and Ballad in my "to be read" pile... she's just amazing! I've linked to her website before, but I'll do it again :). Check it out.

You don't have to look hard for more reviews. I'd suggest checking those out. :)
Read by Emily at 11:27 PM

I just got this from my library recently and I can't wait to start it. I haven't heard a single bad review for this book. So glad you enjoyed it too!