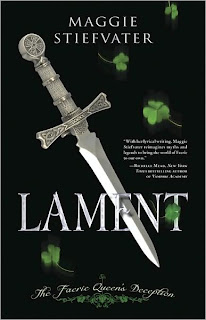 Summary:
"Sixteen-year-old Deirdre Monaghan is a prodigiously gifted musician. She's about to find out she's also a cloverhand - one who can see faeries.

Unexpectedly, Deirdre finds herself infatuated with a mysterious boy named Luke who enters her ordinary life, seemingly out of thin air. But his interest in her might be something darker than summer romance. When a sinister faerie named Aodhan shows up with deadly orders from the Faerie Queen, it forces Dee right into the midst of Faerie. Caught in the crossfire with Deirdre is James, her wisecracking by loyal best friend.

I've heard amazing things about this author - mostly about the book Shiver (which I have yet to get my hands on). Even though I haven't read her most popular book, I'm so glad I found this one! Faerie stories are always so interesting. I didn't really grow up hearing about faeries (like some people apparently did), so the stories are always so new for me.

The characters in this story were so wonderfully fleshed out as well. I was honestly rooting for James through the entire thing. I thought he sounded a lot like some friends I had back in the day :). But I think all of the characters were wonderfully written - except for maybe her family. I had a hard time pinning them down on what they were all about.

From what I can tell, I'm going to love everything this author writes. I've got Ballad (the companion novel to this one) sitting in my to-be-read stack, so I'll let ya know if that holds true. Pretty sure it will.

I'd definitely recommend this to anyone looking for a great fantasy - that includes some romance as well. It's fantasy first and foremost, but the author does a great job throwing that romance everyone loves into it. But as I said, recommended highly. Probably for 9th grade and up. But that's just a thought.

Take a look at the author's website to see all that's coming soon!